In order to populate the prairies in the early 1900’s, the Canadian government sold parcels of land for a mere $1 to people of many different cultures. The region of Bellevue was populated by French Canadian settlers, mostly from Québec. It’s situated in the heart of the Métis communities of Batoche, St-Laurent and St-Louis. These parcels of land bought by the French settlers were covered with prairie and sloughs. The settlers’ priority was to break the land so they could have gardens to feed their families and fields of grain and hay for their farm animals.
It wasn’t until the Second World War that technology changed the agricultural landscape. Mechanized farming came into style with tractors and combines which led to larger farms specializing in the production of wheat, oats, barley, canola, lentils and peas.
Today, the region of Bellevue is still known for its perfect terrain and temperature for cultivating these crops. A 31-foot-tall pea plant metal sculpture was created and mounted west of the Cultural Centre in 1995. It was unveiled by then Governor-General of Canada, his Excellency Roméo LeBlanc, when he came to visit the Bellevue community on September 5th, 1995.

History of the company

A VISIONARY GENERATION – BUILDING ON AN IDEA TO FEED THE NEEDS OF A COMMUNITY
(Pictures) Jean Gaudet, Ronald Gaudet, Tony and Francis Gaudet
After the great depression ofthe 30’s, farmers in the Bellevue area were earning almost nothing for their wheat, only 16 cents a bushel. A few of them ventured into seeding yellow peas for pea soup. After realizing the terrain in the region of Bellevue was very suitable for growing yellow peas, Jean Gaudet started harvesting them and selling them to the Quebec Company Catelli, which used the peas to make Habitant brand pea soup. By 1950, he had established a successful marketing technique and was the first broker in Saskatchewan to bag and ship yellow peas to the Quebec market.
In the 70’s, Habitant pea soup became quite popular and the demand for yellow peas grew. Jean Gaudet passed this trade to his son Ron Gaudet who expanded the marketing of yellow peas by establishing a small cleaning plant on his farm. This plant was able to clean and bag three semi-truck loads of yellow peas per month.
Anecdotes: The Sisters of the Presentation of Mary of Bellevue ordered peas from Quebec. To their surprise, they discovered the bag originally came from Belle Pulses in Bellevue, Saskatchewan. When Ronald Gaudet found out, he told them that whenever they had an urge to eat some good pea soup to let him know and he would gladly oblige.
When a Montreal packager was ready to reject a load of peas, Saskatchewan processor Ron Gaudet travelled to the plant, took all 1,200 bags apart, examined and cleaned the contents and sewed the newly-accepted peas back into the bags.
In 1979, Ronald Gaudet and his sons, Gustave, Victor and Antoine started the company Belle Pulses cleaning all pulses, peas, lentils and fava beans from all regions of Saskatchewan. They worked hard to meet the needs of local producers. Continued product demand and expansion has allowed the business to perfect its operation.
In 1982, they started processing split peas when they purchased a pea splitter, the first of its kind in the province. Fifteen thousand tons of pulses, 90% of the pulses produced, were now exported worldwide. Product was trucked to the nearest elevator and rail line in Domremy, Saskatchewan. Belle Pulses had to buy and move an extra elevator to Domremy in order to keep up with the demand. They were the first to contract and encourage the growth of green peas. Over the years, research has assisted producers with growing resistant crops and increasing yields. By 1989, the Gaudets had perfected the splitting of green peas. The system was operated until 1996, when a second line was introduced to split lentils. In 1999, however, lentils were abandoned; there was enough work to do with peas.
In 1994, Ronald Gaudet passed away leaving the business to his two sons, Tony and Francis.
***Ronald Gaudet was inducted into the Saskatchewan Agricultural Hall of Fame on August 3rd, 2003 as the founding director of the Saskatchewan Pulse Growers Association and for serving on the Saskatchewan Pulse Crop Development Board. His son Tony said, “Dad was very giving and he never tried to cheat anyone. He was not afraid of hard work and he definitely had confidence in the future of the pulse industry”.
By 2001, further expansion was underway. An elevator was bought from the Saskatchewan Wheat Pool in Duck Lake to clean, split, bag and store green peas. The Bellevue site is used to process split yellow peas.
Today, Belle Pulses is always looking for new opportunities to increase market share. 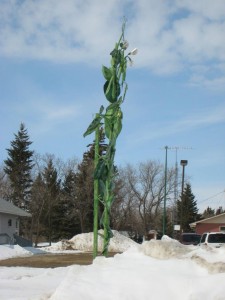